Those of you who are more hands on, can go ahead and try this DIY 🙂

Mondays are not the most popular day of the week by any means, what with two days of blissful rest getting back to the grind might not make you want to fist pump .. but here’s hoping this edition of HI5 Monday provides you with some entertainment 🙂

2. Had this delectable fruit+chocolate combo at forbidden fruit at the village. A must try!

3. Was walking by the Louis Vuitton store on 5th avenue.. A fitting tribute to Yakoi Kusama.. Stunning display! :O

4. These Miu Miu kicks make me want to cry.( BLAME THE PRICE TAG IN PART 😉

5. I haven’t managed to find a job yet( sob sob) and this free app has been offering me so much solace when I am down and out.. If you haven’t tried it already go ahead and doodle away!:D it’s therapeutic hehe

Here’s wishing all of you a super happy weekend 😀

Meet the poster child of mix and match…. Tamu McPherson, fashion editor at Grazia makes dressing up seem like a breeze. She marries masculine sharply tailored  garments with ladylike pieces to create a look that makes you go..” Now why didnt I think of that?!” While she loves her neutrals, trust her to rock the color pops! 😀 New York bred, and currently residing in Milan she brings her own brand of cool to anything she dons! her favorite accessory? – Her camera.. Get to know her at her blog 😀 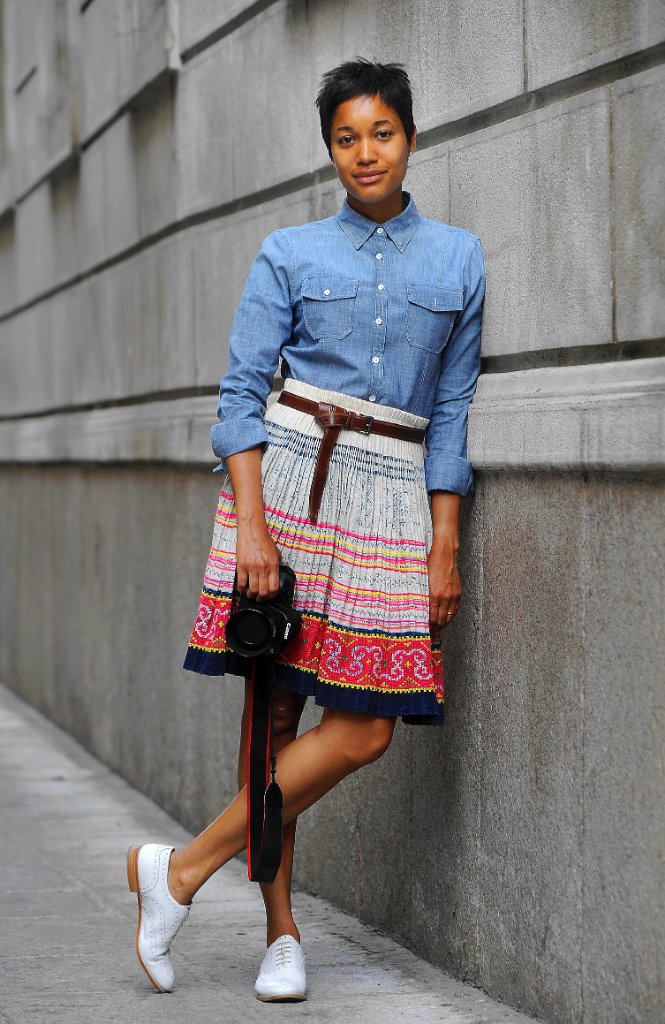 With the sun beating down upon us here in New York, slipping into an all white ensemble doesn’t seem like such a bad idea!:) Not your style?.. Now you might just change your mind 😀 Stay hydrated lovelies 🙂

Hello everyone! Yet another week has dawned; plenty of things have been going on for me so this week’s edition of Hi5 Monday will hopefully catch your fancy 😀 So here goes

1. Passed through this Marimekko store that decided to make their store front look like a bakery window. Additionally they also made my mouth water 😉

2. Caught the first episode of project runway – Season 10. Why is it that I can’t make up my mind on who I want to root for but have already sort of decided who I don’t ? 😛

3. Stuffed my face without a regret (not until the end of the day at least :P) on Cajun fries from five guys 😀

4. I was at Columbus, Ohio this past week for interview like I already mentioned and saw this guy scaling a wall…. for a moment my jaw dropped, until I realized it was a sculpture installation. That doesn’t make it any less awesome now does it? 😉

5. I am super intrigued by how Carine Roitfeld’s magazine is going to turn out. This image was a preview released on the website, and if she was looking to create interest; Job well done!

Here’s wishing all you readers a very happy week ahead. 🙂

It’s not very often that I post excerpts from an editorial, but this one from VOGUE India I couldn’t pass this up. I’ve been bringing you glimpses of India and it’s heritage in this section and decided there would be no better way to do that than this –  an amalgamation of stunning textiles, embroidery, printing techniques and modern silhouettes in an olympics themed setting! 😀 (Brilliant concept don’t you think? ) I believe the editorial captures a sizable portion of the burnished Rajasthan landscape and fiery color palette indigenous to the indian culture. I like the details that make it quintessentially indian – the obvious elephant and palace references as well as the subtle nod to the milk-can on the cycle. I hope you’ll find it as visually stimulating as I did 😀 Have a great weekend dearies!

I know I am a little late on this one but nevertheless…:) The varsity jacket first made it’s appearance last fall on the runway. It’s still around, probably with all the sport influences the Olympics is passing on to the fashion world 🙂 I love the skinnier version for women, it can immediately dress down any outfit and make you look super chic without trying too hard. And here’s proof that it can be worn in so many different ways! So now you might just want to consider buying your own and not steal your boyfriend’s. (Guilty as charged):P

Hey everyone! 🙂 Missed me?  I had to go to Ohio for an interview and hence the disappearing act! Now am back in New York with yet another trend update! And this time it’s the cropped top! No no don’t hit the back button just yet! 😉 Crop tops are definitely not for everyone. That being said there are ways to make it flattering. Irrespective of my sweet tooth and weak determination to work out, I am going to give it a try. In case you are too, here some great pointers to crop it:)

note:  If you own a beach body, simple gawk at the pictures below and skip the rest of the post 😛

1. Most important rule, if you choose a baggy crop, pair it with a fitted bottom and vice versa to avoid looking like a paper bag 😛

2.If you are not too comfortable baring your midriff, pick a high waisted skirt/ pant/ shorts with your crop top! That ways you’ll be creating a defined waistline and showing minimum skin.

So now you don’t have to just stop with eyeing these cute pieces but can actually own them! 🙂

Ralph Lauren is given the task of designing the uniforms for the american olympic team. Kind of a no brainer here. His brand was founded on the basis of the classic american prep look and he has made a name and several millions off this image for decades… so nothing could go wrong right? Well turns out it could. The outfits while looking great(maybe discounting the beret and the awkward skirt length) seem to have come with the wrong tag! Literally. Mr. Lauren designed a line up of perfectly prep iconic american clothes that were made in China! Predictably several people including fellow designers and several government officials are calling him out on it. Here are my thoughts

– Outsourcing will always be a center of debate with regards to wether it is good or bad for the economy. Often brands compete for the “best price” and end up choosing countries like India and China for the lower cost involved. But with the competitive advantage and pricing taking a back seat in this case, manufacturing the opening ceremony outfits elsewhere just seems like a losing proposition.

– It is also relevant that the US olympic team is privately sponsored so there are probably several financial clauses which we are not privy to. So this whole outsourcing could have been a result of fine print! But still it seems like a weak excuse when “american pride” is taking center stage! On second thought, these outfits are for sale on the RL website so I guess being profitable may just take usurp pride!

– Perhaps, this whole situation is a reflection on today’s economy. It is very possible that uniforms in the past have been outsourced but it’s relevance seems hard hitting in today’s world when jobs are fewer and the garment industry here is in serious need of a new lease of life.

The athletes probably have more pressing concerns than their uniforms and as for Ralph, this too shall pass! Meanwhile the Brits are probably feeling better about Stella’s designs! 😉