Ebay is the home to some buried treasures and this necklace was one such piece I did some digging to find 🙂 It is a little different from my usual style and in a sense it reminds me of home! I pulled on one of those over sized tunic tees with ridiculously hight slits, paired it with leggings and kept everything monochrome! And voila I ended up building an outfit around it and let the silver shine through(literally) 😛 Happy friday and MAKE THE WEEKEND COUNT 🙂

Today is usually about the previous week’s highlights but since there were several requests to see pictures from my wedding, I thought I’d comply  and secretly relive my time in India:D!

I had a two day wedding surrounded by a ton of family and friends, swathed in bright silks,jewels and fragrant jasmine- trying to act coy and failing, stealing glances at my to-be husband, trying to remember long forgotten faces, posing away for the camera, alternating between blushing,giggling & happy tears, stuffing my face with all the delicious food, grinning away till my jaw hurt…. Sigh! I wish I had an extra week to recoup:P  Anyway here are some moments which I thought would be fun to share with you’ll. Enjoy your monday and USA folks thankfully this week’s a short one 😉

Heading out doors? The beach maybe? Give your favorite tee a break and pull on a shirt instead, you look more put together while still keeping it causal! And feel free to go crazy with your colors…. like I did with this cobalt one – perfect for the last few remaining weeks of summer B) Say what?

DISCLAIMER 1: My posts are usually fun ( if i may say so myself) but let me warn you upfront- this one isn’t, so if you are looking for a breezy read I suggest you consider skipping this post.

DISCLAIMER 2: I was born and raised in India. Irrespective of it’s shortcomings I love my country with a passion. Not all places in India are unsafe. There’s good and bad everywhere. So if you considered visiting please do not put your plans on the backburner!

DISCLAIMER 3: Not all men are monsters. I have had the fortune of meeting some incredible men : my dad, my brother, my boyfriend and many others. Plenty of them have been raised into treating women as counterparts as opposed to several others who simply view us as objects. So when I use the word “men” loosely it refers to the latter.

I have been having trouble sleeping the last couple of days. It surely cannot be a coincidence that this has something to do with the spate of hate crimes against women in India. And truly this isn’t a problem with just India but the rest of the world too but then I haven’t lived anywhere else so I am simply talking based on my experiences. I am too horrified to recount the recent tragedy but you can read about it here. ( RIP) I repeatedly ask my self how some people have it in them to commit such atrocities… how they will themselves to indulge in such heinous acts without as much as batting an eyelid.

Every time I read about such an incident, I am appalled at how flawed the society is in it’s outlook towards these victims and brand them as “asking for it”.(The people who argue that westernization has caused the decline of Indian culture and the “modern woman” has brought this onslaught upon herself fail to remember that civility is part of our culture too!)  Welcome to the warped system were a woman is judged by the way she dresses(And we are talking a jeans and a t shirt here!). Throw in a pathetic excuse of a justice system and voila you have a “rape- friendly” environment where men feel “entitled” to the women. As if just one man weren’t enough, these men now go about their business in gangs! Shame on them!

Sadly though I must admit that in India the objectifying of women is just accepted as a part of life. We Indian women fume and fret about the raw deal we are getting and at the end of the day we have no choice but to just cow down to the pressure of dressing” or “behaving” a certain way just to “blend in” and “live in peace”. I shamefully admit that while I go on about a fancy red lip and showing some leg sitting here in NY, back at home you’d find me bare faced, modestly dressed and low key. I have done the I-don’t-care-what-men-think-I-will-wear-a-skirt-today-routine, only to realize that a cute outfit isn’t worth trying to ward off skin crawling looks and random stalkers!

As a woman, if getting through everyday unscathed is a struggle in itself, there is something terribly wrong with the moral fabric of the country; especially one that systematically kills female babies in the womb because they are less desirable will never find gender equality. We need to realize that until women are treated well( which will not happen unless rigorous punishment is exercised), there can simply be no progress! My prayers are with her family.

Being a land so rich in textiles, it’s time I wrote about some of the dyeing techniques that are indigenous to India but nevertheless well known globally. :)Ikat is a term that you surely have heard before, if not familiar with. Well you haven’t…? Here’s your trivia:D

1. Ikat is a dyeing technique where the individual yarns are dyed in a specific pattern and then woven together to form a stunning final  visual. Since it’s the yarns that are dyed and not the fabric itself, the output is usually characterized by a slightly fuzzy edges which makes each piece unique.

2. Though the origins of this textile have been traced to South America and parts of Asia, it’s tough to pinpoint the definite source but nevertheless, today India, Indonesia, Japan,Guatemala,parts of Ecuador make these lovely fabrics.

3. During older times, Ikat was given away by the royalty as gifts and was a symbol of wealth.

4. Since the process of making this textile is so complicated and involves painstaking detail, printing the pattern has been the easy way out, but it is quite safe to say the differences are like chalk and cheese 😀

5. Ikats are mostly made in cotton and silk and can dress your homes as well as you 😀

Do you own any Ikat prints?:)

As India celebrates it’s 65th year of independence, I take a minute to reflect on the things that make this country so unique….a land so diverse be it the many languages, varied cultures, multiple religions, different cuisine, contrasting terrain…yet together in spirit… a place where snake charmers and software engineers co exist 🙂  They say a picture can speak a 1000 words, in that case here’s my essay. India.. How I miss you..

Several of these images may be cliches, but doesn’t take your breathe away any less..HAPPY INDEPENDENCE DAY fellow indians 😀

It’s not very often that I post excerpts from an editorial, but this one from VOGUE India I couldn’t pass this up. I’ve been bringing you glimpses of India and it’s heritage in this section and decided there would be no better way to do that than this –  an amalgamation of stunning textiles, embroidery, printing techniques and modern silhouettes in an olympics themed setting! 😀 (Brilliant concept don’t you think? ) I believe the editorial captures a sizable portion of the burnished Rajasthan landscape and fiery color palette indigenous to the indian culture. I like the details that make it quintessentially indian – the obvious elephant and palace references as well as the subtle nod to the milk-can on the cycle. I hope you’ll find it as visually stimulating as I did 😀 Have a great weekend dearies!

In yet another edition of Incredible India, I decided to feature Paisleys : one of the most widely recognized patterns across the world today.My post is going to sound right out of a history textbook but nevertheless here’s some trivia 🙂

1. Believed to be predominantly of Iranian or Indian origin, it however got the name from the scottish town of the same name.

2. The mango motif holds a huge place in hindu iconography  and is widely continued to be used in textiles, shawl, carpets and saris.

3. The british colonization of India took the Paisley pattern to other parts of the world resulting in several hybrid designs and interpretations.

4. In course of time, the paisley became associated with the Bohemian vibe and “summer of love”.

5. Paisley manages to come back into the fashion cycles every once in a while under different interpretations like these 🙂 It manages to somehow retain it’s old world charm.. So next time you wear Paisley, take a moment to appreciate it’s rich history 😀 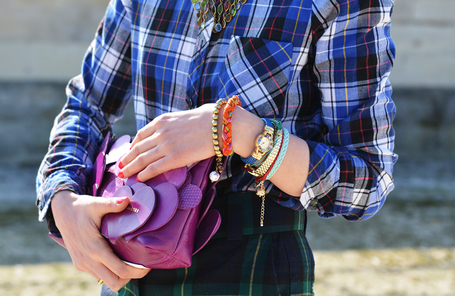 This may be my cheesiest title yet but do continue reading :). I am just super excited to introduce you to the madras plaid, one of the distinct fabrics of Indian origin that has gained mainstream acceptance in international fashion. They get their name obviously from their place of origin- Madras, a city in the southern part of India which not-so-coincidentally is where I am from and hence the excitement 🙂 These checks are of light cotton, are super comfortable for the impending weather and are characterized by their vivid colors and distinct plaid patterns. Versatility is their middle name –  here are 3 ways of wearing it that will help you realize madras plaids are not only for men

1.  A pair of denim shorts marry a fun madras shirt for a look that’s casual and ” I-am-effortless-like- that”. 🙂

2. Madras can look incredibly feminine – rock a skirt or a dress with chic accessories and there you have a piece that can transition from day into evening.

3. Add some edge to our outfit by choosing a larger dark plaid or simply add some leather or a pair of boots.

India has played muse to many a designer, most recently Chanel. So its only fair it gets it’s due.;) I have taken it upon myself to discuss every once in a while people/events/ items who/that are distinctly Indian and worth knowing! I start with the Indian fashion industry, which while predominantly synonymous with bridal fashion, has some extremely creative and talented individuals, case in point Manish Arora! And here are 5 reasons why you need to know this man 🙂 and no reason why you shouldn’t becomea fan 😉

1. He’s made a huge mark on the international fashion scene and is currently the creative head at Paco Rabanne.

2. He has been showing at the London/Paris fashion week since 2005 and has been worn by celebs like Lady Gaga,Rihanna, MI.I.A, Katy Perry, Heidi Klum, Nicole Sherzinger, Selena Gomez and others.

3. He’s super creative, quirky and crazy (in a good way) that he’s referred to as the John Galliano of India ( I might have made that up!;))

4. His use of color, prints and drama has India written all over it.

5. Has been involved in some fun collabs – Swatch and M.A.C in particular I love.

Bonus reason: 6. Christopher Kane loves him. and I love them both:)